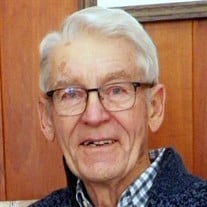 George Russell Grundy, age 87, of Minocqua, passed away Monday, February 11, 2019 at Howard Young Medical Center. The son of George A. and Myrtle (nee Beck) Grundy was born in Hazelhurst on August 28, 1931, and lived his entire life in Minocqua. He graduated from Minocqua High School and briefly attended college at UW Marathon Campus. Enlisting in the Air Force, he served during the Korean War Conflict as a medic. Stationed at one point in Delaware, he sent pennies from the last state to help fund the Million Penny fund raiser for Lakeland Memorial Hospital. Upon military discharge he became a member of the American Legion Madsen-Empey Post 89 with continuous membership of 65 years, serving as Commander, County Commander and Honor Guard Chaplain. He was also honored to participate in the “Never Forgotten” Honor Flight to Washington D.C. in 2014. Upon his return from military service, George was employed by the Minocqua Post Office and married Bernadine “Betty” Johnson in 1956. He then became employed by Wisconsin Public Service as a meter reader recalling his early days reading some meters on snow shoes. During his 33 years at WPS he wore many hats including lineman, appliance repairman and gas serviceman. He was involved in various community activities as a member of the Jaycee’s and a charter member of Calvary Lutheran Church serving at one time as church council president. Under the instruction of Noble Lee, he obtained his pilot’s license, joined a local flying club and eventually became chairman of the Lakeland Airport Commission during the 1960’s. George enjoyed hunting deer and birds, fishing, playing softball and bowling. After retirement, he took up golf and became a devoted reader of westerns and enjoyed traveling throughout the United States in an RV with his wife. George is preceded in death by his parents; brother, Richard W. Grundy and sister, Chris Bonneau. He is survived by his wife, Bernadine “Betty” J. Grundy; son, Andy (Bobby) Grundy; daughter, Allison (Paul) Thome; 4 grandsons, Kyle and Aaron Grundy, Christopher and Parker Thome and sisters, Gloria (Leon) Leash, Susan Grace, and Katie Grundy. A Memorial Service will be held at Calvary Lutheran Church in Minocqua on Monday, March 4, 2019 at 11am with visitation one hour prior to the service. Military Honors will follow. In lieu of flowers, memorials may be given to Calvary Evangelical Lutheran Church, the American Legion Madsen-Empey Post 89 Scholarship Fund, the Minocqua Museum, the Minocqua Public Library (large print books) or a charity of choice.

George Russell Grundy, age 87, of Minocqua, passed away Monday, February 11, 2019 at Howard Young Medical Center. The son of George A. and Myrtle (nee Beck) Grundy was born in Hazelhurst on August 28, 1931, and lived his entire life in Minocqua.... View Obituary & Service Information

The family of George R. Grundy created this Life Tributes page to make it easy to share your memories.

Send flowers to the Grundy family.