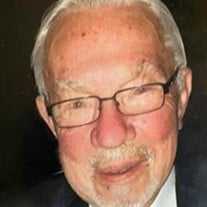 After a brief illness, Dr. George Anast died surrounded by his family on June 28, 2021. He was 92 years old. George Thomas Anast was born June 9, 1929, to Thomas and Anna Anast in Joliet, Illinois. He grew up in Joliet, graduating from Joliet Township High School and Joliet Junior College. George went on to graduate from the University of Illinois at Champaign-Urbana, and in 1950 began his training at the University of Illinois College of Medicine, graduating in 1954. He served his country as a physician, stationed at Naval Hospital #16 in San Diego, California. He was honorably discharged from the Navy in 1959 and returned to the Chicago area to complete a residency at the Shriners Hospital for Crippled Children. In 1960, George joined J.D. Farrington, MD in orthopedic practice in Chicago. This partnership would chart the trajectory of George’s career in emergency medicine and ultimately led him to Minocqua, Wisconsin. George was one of the early pioneers of emergency medicine and was involved in the first training sessions for ambulance drivers that would lead to a formal curriculum for Emergency Medical Technicians. He was active with the Committee on Injuries of the American Academy of Orthopedic Surgeons and was one of the authors of the first edition of The Emergency Care and Transportation of the Seriously Ill and Injured, which served as a standard text for EMTs. One of George’s most important accomplishments was the development of a post-graduate course for emergency department nurses. This effort led to the establishment of the Emergency Department Nurses’ Association. He was enormously proud of his work on the behalf of ED nurses. Another was his research published with colleagues that demonstrated the utility of sound velocity to determine fracture healing. In 1972, George and Velta moved to Minocqua and he took over Dr. Farrington’s orthopedic practice. For his first several years in the Northwoods, George was on call 24/7/365 and claimed to be the only orthopedic surgeon between Minocqua-Woodruff and the North Pole. He provided first class medical care to area residents and was an advocate for local healthcare. George worked to develop new services to augment the hospital’s. Notable among these was Northwoods Rehabilitation Associates, which offered physical therapy and other rehabilitation services. Ultimately, George retired from clinical practice to serve as CEO of Howard Young Medical Center, where he ushered in a period of strong growth, leadership, and renewed commitment to the community. George’s interests were wide-ranging and he mastered anything he undertook. A lifelong sportsman, he was an excellent skeet shooter–breaking a perfect 25 into his 90s. He shot his last round of skeet only a couple of weeks ago and bagged a doe with a crossbow last fall. He took up motorcycling when he was 65 and rode twice to Alaska from Wisconsin. George loved to motorcycle tour and he and Velta crisscrossed most of the western U.S. on their Honda Goldwing. He also ventured to Europe for a BMW motorcycle tour with good friends. For many people, George was best known for his professional-grade photography. He always had a camera with him wherever he went. He made the transition from film to digital easily and loved photographing wildlife--especially sandhill cranes, snow geese, and bald eagles. He shared many of his bird photos and videos on Facebook, always providing interesting educational commentary. As the winters grew longer and their circle of dear friends narrowed, George and Velta became winter residents of Tucson, Arizona, where they made many new friends and “family.” They seamlessly adapted to desert life and George found new shooting buddies. But it was summers in Minocqua, sitting on the porch or dock watching the sunset with Velta and a glass of wine, that he cherished the most. A man of exceptional intellectual depth and breadth, he had a wicked sense of humor, no tolerance for mediocrity, and was on occasion known to lose his temper. He was a quiet philanthropist, generously giving to local organizations and, often, to individuals. His most important philanthropic effort was a recently endowed annual scholarship fund to a private school in Tucson for children of Hispanic descent. George was preceded in death by his parents; an infant brother, Stavros; his daughter Melissa Ann Paige; his mother-in-law; three brothers-in-law; a sister-in-law; and too many friends and colleagues. Left to hold a lifetime of memories close are his beloved and devoted wife of 48 years, Velta, daughter Adrian (Tim Wright), son Jason (Cleo), grandchildren Ryan and Melina, two sisters-in-law, four nieces, three nephews, and many “adopted” daughters and nieces. AVE ATQUE VALE Bolger Funeral Home is providing cremation services. Private interment will be in Joliet, Illinois later this summer. A Celebration of Life will be held at the Minocqua Country Club on Sunday, August 1, at 4 pm. All are invited. A separate Celebration of Life will be scheduled in Tucson this fall. If you wish to make a donation in George’s memory, please do so in any way that would have made him smile.

After a brief illness, Dr. George Anast died surrounded by his family on June 28, 2021. He was 92 years old. George Thomas Anast was born June 9, 1929, to Thomas and Anna Anast in Joliet, Illinois. He grew up in Joliet, graduating from Joliet... View Obituary & Service Information

The family of Dr. George T. Anast created this Life Tributes page to make it easy to share your memories.

After a brief illness, Dr. George Anast died surrounded by his...

Send flowers to the Anast family.