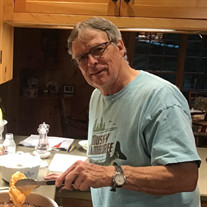 Gary R. Schleinz, born October 27, 1945 in Rhinelander passed away on April 6, 2021 following a short battle with cancer. Beloved husband of Emily Schleinz and best friend to their little dog Cooper, Gary was the eldest of five siblings born to Donald and Lorraine Schleinz. Gary graduated from Rhinelander High School in 1963, and then UW-Whitewater. Following graduation, Gary first worked for Wausau Insurance as an adjuster in the Milwaukee area, and soon became involved in the world of racquetball. Gary was responsible for designing and maintaining one of the premier racquetball leagues in America, located at the Wisconsin Athletic Club in West Allis, and enjoyed his career for the next 30-plus years, retiring in 2006. Gary and Emily enjoyed traveling throughout the US with many visits to historic Civil War sites. They also traveled to numerous cities in the country to visit their siblings. Upon retirement, Gary and Emily realized their life-long dream when they built their home on High Lake in Boulder Junction, WI. They enjoyed over 15 years in the beautiful Northwoods while enjoying most outdoor sports including hunting and fishing. Gary is survived by his wife Emily with whom he enjoyed 49 years of marriage. He is further survived by their son Mark Schleinz and his wife Amy, their grandson Remington (his girlfriend Taylor-Autumn), twin granddaughters Bailey & Madison, and their new great-grandson Finley. He is also survived by his brother Bruce Schleinz (his special friend Yvonne), and sisters Jill Katz and Julie Schleinz-Haggard (husband Phil), brother and sister-in-law Jim Winkler and Kathleen Krager, and numerous nieces and nephews. Gary was preceded in death by his parents, Emily's parents, his sister Cathy, and niece Tawny. The family will celebrate Gary's life at a later date. Gary's family thanks his numerous friends and extended family for the comfort and peace they gave him during his final days. The family appreciates the care provided by the medical staff at Marshfield Clinic and Hospice. Memorials can be sent to Compassus Hospice 1571 Hwy 51 North, Suite C, Arbor Vitae, WI 54568.

The family of Gary Schleinz created this Life Tributes page to make it easy to share your memories.

Send flowers to the Schleinz family.