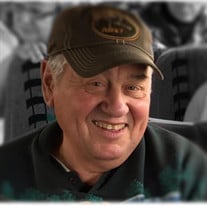 Eugene Ralph Schellinger passed into eternal life on February 12, 2021 at his home surrounded by loved ones, after a courageous battle with cancer. Eugene was born August 15, 1941 to Arthur and Natalia Schellinger. On August 20th, 1966 he... View Obituary & Service Information

The family of Eugene R. Schellinger created this Life Tributes page to make it easy to share your memories.

Send flowers to the Schellinger family.