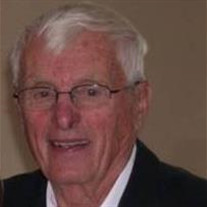 Eugene “Gene” P. Duerst, 89, passed away on August 3, 2019 surrounded by his family. Gene was born in New Glarus, Wisconsin on October 12, 1929 to Palmer and Mavis (Figy) Duerst. Growing up he enjoyed a wide variety of sports and activities but his first love was always baseball. He played shortstop in high school and later in college. Upon graduation, Gene was invited to several major league training camps. Although he was never signed by either the New York Yankees or the Philadelphia Phillies this passion for baseball would influence his future career and his life. Gene graduated from the University of Wisconsin-LaCrosse in 1951 after receiving a 6 month draft deferment in order to complete his college education. He entered the US Army, completed his basic training, and was stationed in Japan for medical training. Gene served his country during the Korea War in the US Army’s 8063rd Mobile Army Surgical Hospital, better known as MASH, located just north of the 38th parallel. He served with this unit for 18 months as an operating room technician and also with special services. Upon Gene’s discharge, in 1953, he returned to Wisconsin and accepted a physical education and coaching position with the k-12 Minocqua Islanders. (This school was located in the current town office building on the island of Minocqua.) While chaperoning a high school dance in the fall of 1954, Gene met Norma Johnson. Little did he know that this young woman would become the love of his life for the next 65 years – proving that love stories never end. In 1966, Gene enrolled at UW-Madison obtaining his Master’s Degree in Educational Administration. Together, Gene and Norma raised three children. For 38 years, Gene coached numerous teams, taught physical education and social studies, and served as principal at MHLT. During his tenure he touched the lives of thousands of children. Gene lived a full and happy life staying active and involved until days before his passing. He started the Lakeland area wrestling program, summer little league baseball, and refereed countless sport events. He was honored to be a member of the Never Forgotten Honor Flight and visited Washington D.C. and the Korean War Memorial. Especially moving for Gene was the fact that both of his sons, Paul and Peter, served as guardians on his trip. He was an active member of the Minocqua Lions’ Club, a charter member of Ascension Lutheran Church and served on the church council. He was a member of the Wisconsin and the National Education Associations and served as president of Lutheran Brotherhood’s Northern Lights Branch. Gene was also an active member of the American Legion, Timber Ridge golf course, the Restless Weasels and his coffee group. Gene was always proud of his Swiss heritage and could often be heard yodeling as he drove his boat through the channel to Lake Minocqua. He enjoyed the serenity of fishing whether it was in Canada with family members, on a trout lake, or pan fishing off his pontoon boat. As an accomplished artist, Gene found inspiration in the beauty of the pristine lakes and woods of Northern Wisconsin. He used his artistic talents to create paintings, cards, and wine glasses. He loved playing golf in Minocqua and in Gulf Shores, AL where Gene and Norma wintered for 25 years developing many life-long friends. Even at 89, he was still working on improving his game. They were fortunate to have golfed in 45 states in their 50 state quest, as well as golfing in four foreign countries; a highlight for Gene was playing the Old Course in Scotland. Gene is survived by his wife Norma and their three children Kim (Dan) Widmer of Minocqua, Paul (Jackie) Duerst of Wausau, and Peter (Laurie) Duerst of Waterford. Gene is also blessed to be survived by ten grandchildren: Whitney (Chris) Martinez, Danielle (Kelly) Kretz, Stephen (Cate) Duerst, Lauren (Jordan) Slagowski, Logan, Nikolai, Erica, Hannah, Jack and Nick Duerst and one great-grandchild, Clara Duerst. Gene loved watching his children and then his grandchildren participate in sports, becoming their biggest booster. Gene was preceded in death by his parents, Palmer and Mavis Duerst. He is also survived by his sister, Carol (Dave) Hustad, and brother, Wayne Duerst. We are honored to celebrate the dash between the day he was born and the day he left us. What’s not to admire about a man who not only loved and cared deeply for his own children and grandchildren, but every student he had the joy of working with? Visitation will be from 9:00 AM to 11:30 AM on Thursday, August 8, 2019 at Ascension Lutheran Church in Minocqua. The funeral service will follow immediately after, at 11:30 AM. In lieu of flowers, the family requests that donations be made via check to the Eugene Duerst Lakeland Area Scholarship Fund, 8070 Brinkland Drive, Minocqua, WI 54548 in memory of Gene Duerst. Bolger Funeral and Cremation Services is assisting the family visit www.bolgerfuneral.com to share condolences.

The family of Eugene "Gene" P. Duerst created this Life Tributes page to make it easy to share your memories.

Send flowers to the Duerst family.