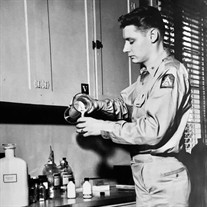 Edward Grant Rippie, Ph.D., age 90, of Hazelhurst, WI, formerly of White Bear Lake, Minnesota, died March 22, 2022, after a short final illness. Ed, the son of Edward and Esther (nee Stephens) Rippie was born on May 29, 1931, in Beloit, Wisconsin. He graduated from South Beloit (Illinois) High School. He attended Beloit College and then the University of Wisconsin-Madison, from which he graduated, successively, with a B.S., M.S., and doctorate in physical chemistry and pharmacy. In January of 1954, he met Dorothy Tegtmeyer of Hazelhurst, who was also attending UW-Madison, and the couple was married on September 24, 1955. Dorothy and Ed were married for 49 years before her untimely death in 2004. Ed is survived by a son, E. Glenn (Rachel) Rippie of Lake Forest, Illinois. Ed was a Professor in the School of Pharmacy at the University of Minnesota (Minneapolis), where he taught industrial pharmacy, pharmaceutics, and physical chemistry. He was particularly active in research concerning how active ingredients are incorporated into pills and tablets during manufacture and are then made available in the body. He consulted on those topics with pharmaceutical companies and governmental agencies around the world, and invented patented research equipment to study these questions. As a result of his work, he received the Ebert Prize from the American Pharmaceutical Association. Established in 1873, the Ebert Prize is the oldest pharmacy award in existence in the United States and is given annually to the best investigation of medicinal substance published in the Journal of Pharmaceutical Sciences. After retiring in 1997, Edward and Dorothy moved full time to Hazelhurst, where he pursued passions ranging from woodworking to hunting in our Northwoods. He resided here for remainder of his life. A Memorial Service will be held at 2:00 PM on March 29, 2022, at Bolger Cremation & Funeral Services - Woodruff Chapel, 1212 First Avenue, Woodruff, who is serving the family. A second service will be held later in the spring in Rockton, Illinois. In lieu of flowers, memorials may be sent to the University of Wisconsin Foundation.

The family of Edward Grant Rippie, Ph.D. created this Life Tributes page to make it easy to share your memories.