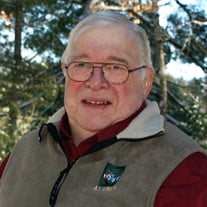 Earl Charles Watkins Jr., of Manitowish Waters, Wisconsin, formerly of Delavan, Wisconsin, passed away on Wednesday, January 15, 2020 at his home with his loving wife, Betty, at his side. Mr. Watkins was born December 16, 1937 in Oshkosh, Wisconsin.... View Obituary & Service Information

The family of Earl C. Watkins Jr. created this Life Tributes page to make it easy to share your memories.

Send flowers to the Watkins family.