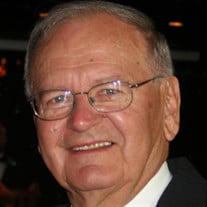 Earl Grupe a humble man of integrity and faith was born into eternal life at age 85 on November 2, 2020. He was surrounded by his wife and family at home as he passed peacefully into his Savior’s arms. Earl was born at Memorial Hospital in Sheboygan, Wi on March 18, 1935 to the late Herbert and Mabel (Hetzel) Grupe. He grew up on the family farm in Cleveland, WI, attended a one room school and then graduated from Central High School in Sheboygan in 1953. He enlisted in the army and served from 1954-1956. He met the love of his life Carol Luedtke in the summer of 1958 in Manitowoc, WI. On September 24, 1960 they married and began a life of love, family and happiness. Earl graduated from U.W. Whitewater in 1960 with a B.S. accounting and economics. He then became part of the public accounting firm of Fonteine, McCurdy (now Arthur Anderson). He spent the rest of his career at the Ph. Orth Co. helping it to grow as Chief Financial Officer. He was genuinely liked by so many because he took the time to talk with people and listen to them. Earl is survived by his loving wife of 60 years Carol of Woodruff, WI. Earl and Carol have two great children. Lori Kiser and her wonderful husband Mark who moved to Woodruff from Omaha to be Earl and Carol’s caregivers. John Grupe and his terrific wife Tanya live in Wausau, WI. Earl was blessed with five grandchildren whom he loved and they adored him. Adam Kiser (Bex) of Kansas City, MO, Caleb Kiser (Taylor) of Seattle, WA, Daniel Kiser (Brenna) of Omaha, NE, Jerel Grupe of Wauwatosa, WI, and Kayla MacIntyre (James) of Virginia Beach, VA. Two great granddaughters Kahlia MacIntyre and Kieava Kiser put the twinkle in his eye every time they visited. Two brothers Vernon (Carol) Grupe and Clarence (Betty) Grupe preceded him in death. Two sisters Caroline Wieland (Adolf Koncilja) and Joyce Lulloff (Frank) survive him as do numerous nieces and nephews. Earl was an active member of Grace Lutheran Church in Oak Creek, WI and Peace Lutheran Church in Arbor Vitae, WI serving as elder and leader in both congregations. He was also an active member of Mitchell Field Rotary in Milwaukee for many years. He loved to hunt pheasants and to fish. That muskie on the wall was showed off a lot! He also enjoyed travel around the world with Carol and good friends. A travel highlight was a 50th anniversary cruise to Alaska with his children and grandchildren. Earl gladly and selflessly served his community and church and cherished his time together with family and friends. He will be greatly missed. Special thanks is given to the caring members of the Ascension Hospice team. We could not have taken care of him without each of you. There will be a memorial service at Peace Lutheran Church, Arbor Vitae, WI on Saturday, November 14 at 11:00 a.m. Due to concerns from the COVID pandemic only immediate family will attend but the service will be live streamed for those who wish to view it. The web address for the service is https://youtu.be/c3HU-Wcg7Q0 There will also be a graveside interment service at the Kassa Cemetery, Cleveland, WI at 11:00 a.m., Saturday, July 3, 2021 followed by a lunch at St. John St. Peter Lutheran Church in Cleveland, WI. In lieu of flowers, donations can be given to Lutheran World Relief or Alzheimer’s Association.

Earl Grupe a humble man of integrity and faith was born into eternal life at age 85 on November 2, 2020. He was surrounded by his wife and family at home as he passed peacefully into his Savior&#8217;s arms. Earl was born at Memorial Hospital... View Obituary & Service Information

The family of Earl H. Grupe created this Life Tributes page to make it easy to share your memories.

Earl Grupe a humble man of integrity and faith was born into...

Send flowers to the Grupe family.