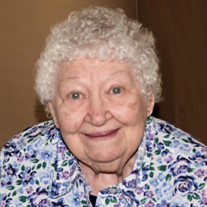 Doris Arleen Schmiechen (nee Caucutt) was born to eternal life on December 12, 2021, at the age of 94. She was the daughter of LaVerne Caucutt and Ann (Anna) Czernisz (nee Wisniewski). She was preceded in death by her parents and husband of seventy-five years, James Fredrick Schmiechen. Also preceding her in death are her sons John W. Schmiechen, Martin J. Schmiechen, daughter Mary S. Wallace, and granddaughter Kendra Schmiechen. Doris and Jim raised four boys and adopted one girl. Doris’ loving and nurturing nature led them to also foster many children. They raised their family in West Allis on 85th Street. During this time Doris worked as a nurse’s aide and in 1964 they moved to Milwaukee on 95th and Morgan. In 1973 they moved to Boulder Junction, Wisconsin, living on Whitney Lake. In 1993 Jim and Doris moved to Arbor Vitae Estates in Arbor Vitae. Upon the hospitalization and death of her husband in July, 2020, Doris moved to Lakeshore Assisted Living facility in Lake Tomahawk where she received excellent care and resided until her death. Doris was a devout Catholic, who loved children and nurturing others. She loved to give out $2 bills to others, particularly children. She thoroughly enjoyed the wildlife up north, especially the deer and birds. She would have as many as fifteen deer at her feeder at one time. The humming birds and grosbeaks were a delight and “oh, and don’t forget to put a little bird seed on the ground for the squirrels.” Doris is survived by her brother Tony (Anthony) Caucutt of Destin, Florida and sons Robert L. Schmiechen (Karen nee Grim) of Waukesha, Wisconsin, and James A. Schmiechen of Broomfield, Colorado. She is further survived by grandchildren, great grandchildren as well as other friends and relatives. Funeral services will be held on Wednesday, December 29, at Holy Family Catholic Church 8950 Hwy J, Woodruff, Wisconsin. Visitation from 10:00 – 11:00 a.m. with church service following at 11:00. Following the church service will be a luncheon and celebration of Doris’ life and opportunities to share in the church hall. Interment to take place at St. Anne’s Cemetery, Boulder Junction following the luncheon.

Doris Arleen Schmiechen (nee Caucutt) was born to eternal life on December 12, 2021, at the age of 94. She was the daughter of LaVerne Caucutt and Ann (Anna) Czernisz (nee Wisniewski). She was preceded in death by her parents and husband of... View Obituary & Service Information

The family of Doris A. Schmiechen created this Life Tributes page to make it easy to share your memories.

Send flowers to the Schmiechen family.