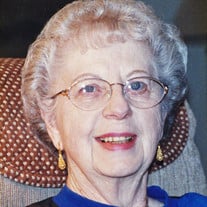 Doris Perrin Bayne, 98, of Grace Lodge, Rhinelander died May 10, 2019. She was born July 22, 1920, in Lead, South Dakota, the daughter of Mary and Frank Perrin. She graduated from Methodist Kahler School of Nursing in 1943 and served as an Ensign in the US Navy from 1945-1946. Doris married Kenneth Bayne in 1946 and was divorced in 1964. At that time, she returned to school and received a Bachelor's degree from North Park College in 1968. She completed Masters level courses at the National College of Education, and received her teaching certification for the Chicago Public Schools in 1974. Doris’ nursing career encompassed many roles, including hospital nursing at Belmont Hospital, intake nurse at the Field Clinic, nursing instructor at Ravenswood Hospital School of Nursing, and teacher nurse for the Chicago Public Schools. Upon retirement, she moved to Stevens Point where she became active in the community. She joined the Women’s Club and St. Paul’s United Methodist Church, volunteered at the hospital and senior center and continued to hone her bridge skills. She always had cookies and soda on hand when her grandchildren dropped by to visit and greeted them with her patented Grandma Doris love pat, the intensity of which reflected the intensity of her love for her family. She enjoyed traveling to Europe, South America, Australia and New Zealand, and throughout the United States and Canada. She moved to Grace Lodge in Rhinelander, Wisconsin in 2007. Doris is survived by her two daughters, Nancy of Plover, WI and Karen Nania of Tallahassee, FL. She is also survived by grandsons, Galen and Braden Bayne-Allison, Joseph and Jonathon Nania and Dan Trifone, and great-grandchildren, Kailyn, Anthony, Joseph, Jr., and Ezra Nania. She was preceded in death by two sisters, Carolyn and Francis and one brother, Donald. A Memorial will be held at Grace Lodge, Rhinelander, Wisconsin at 3:00 p.m., Wednesday May 15. In lieu of flowers donations may be made to Grace Lodge.

Doris Perrin Bayne, 98, of Grace Lodge, Rhinelander died May 10, 2019. She was born July 22, 1920, in Lead, South Dakota, the daughter of Mary and Frank Perrin. She graduated from Methodist Kahler School of Nursing in 1943 and served as an Ensign... View Obituary & Service Information

The family of Doris P. Bayne created this Life Tributes page to make it easy to share your memories.

Send flowers to the Bayne family.