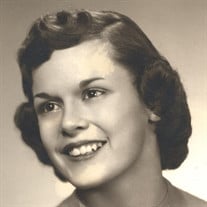 On Sunday, June 2, 2019, Donna Jean Nelson, loving wife, mother and grandmother, passed away at the age of 79 plus one week. Donna was born on May 27, 1940, in Harvard, Illinois to Bob and Marinetta Andrew. She graduated from Harvard High School in 1958, and then worked in the family business, George V. Andrew & Son Plumbing & Heating, for a number of years thereafter. September 12, 1959, she married John A. Nelson of Delavan, Wisconsin. They raised one son, Thomas John. Several years later, they started a business together, Nelson Decorating Service in Harvard. After moving to Lac du Flambeau, Wisconsin in 1977, she worked as a bookkeeper at Pukall Lumber and Inman-Foltz. She later became the Town Treasurer in Lac du Flambeau, but went on to retire from the Lac du Flambeau Public School. She loved life on Lower Sugarbush Lake, but she and her husband built a home together in Arbor Vitae, Wisconsin to be closer to their family. She often said how much she loved that house. She mostly just loved being with her family, and generally living in the beautiful Northwoods of Wisconsin. One of her passions was travelling the country in their motor home with her husband, and they also spent many winters in the Gulf Shores, Alabama area in it. They ultimately wintered in Lillian, AL, where they had a very nice Park Model Home. Donna was preceded in death by her father, mother, and sister Mary Ellen (Peterson), but is survived by her husband John, her son Tom and his wife Kathy (Shepherd), her Sisters Karen (Whaples), Carol (Marden), Linda (Thomas), brothers George and Bob (Andrew), and Grandchildren Matthew (Nelson) & Emily (Nelson de Velasco). We all will miss her dearly. A funeral service will be held on Monday, June 10, 2019, at Bolger Funeral Home, 1212 First Avenue, Woodruff, WI, at 11 a.m., visitation begins at 10 a.m..

On Sunday, June 2, 2019, Donna Jean Nelson, loving wife, mother and grandmother, passed away at the age of 79 plus one week. Donna was born on May 27, 1940, in Harvard, Illinois to Bob and Marinetta Andrew. She graduated from Harvard High School... View Obituary & Service Information

The family of Donna J. Nelson created this Life Tributes page to make it easy to share your memories.