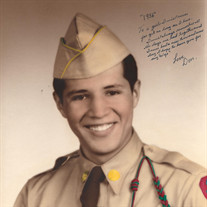 Donald Smith was born 5/9/1937 and died 9/11/18 at St. Clare's Hospital in Weston, WI, surrounded by his loving family. He was born to Spencer and Marian Smith and attended Lac du Flambeau Public School and later graduated from Lakeland Union High School. He went on to serve in the United States Army from 1959-1962. During this time, he came back and married his high school sweetheart, Josephine Louise Trapp, on May 18,1957, and they remained a strong loving marriage for 61 years. He continued to reside in the Lac du Flambeau Community after his years of service. He served as a police officer for 16 years and later was a successful businessman owning a gas station/smoke shop for 15 years. Lastly, Don worked as a teachers aide at the Lac du Flambeau School. He is survived by his loving wife, Josephine and their 3 sons, Garold (Julia), Scott (Maxine) and Kevin (Angela). His grandchildren, Alessa, Scott, Gale, Garold, Shelby, Summer, Karrie, Dylan, Mackenzee, Ashley, Cortney, Macey, Tyler, and Chelsey, along with 13 great grandchildren. He is also survived by his brother, Spencer and sisters, Laverne Poupart, Deanna LaBarge and Judy Birdsbill. Preceded in death by his parents; sisters, Farrell LaGuard, and Shirley Philemon and half sister, Inis. He loved to play golf and to go camping with family and friends. Of all things, Donald will be remembered as a family man, an honest man and a good man. Someone that could be counted on to help in any way that he could. There were many things he enjoyed throughout his life, but the things that gave him the most pleasure were times spent with his family. Donald was a well respected role model and tribal member of Lac du Flambeau. He will be truly missed and will continue to live on in the hearts of his children and grandchildren. He will be forever loved and never forgotten. Visitation will be held Thursday in Lac du Flambeau at the Multi-Purpose Building from 4:00 – 7:00 PM. Services will be Friday at Trinity Lutheran Church, Minocqua, 10:00 AM final viewing and 11:00 AM service, with graveside services in Lac du Flambeau at 2:00 PM.

Donald Smith was born 5/9/1937 and died 9/11/18 at St. Clare's Hospital in Weston, WI, surrounded by his loving family. He was born to Spencer and Marian Smith and attended Lac du Flambeau Public School and later graduated from Lakeland Union... View Obituary & Service Information

The family of Donald Smith created this Life Tributes page to make it easy to share your memories.