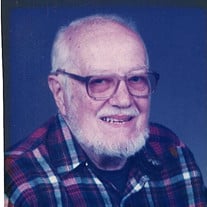 Donald Raymond Martin died peacefully at Lake Shore Assisted Living on December 31, 2019. He was born in Rib Lake, Wisconsin on May 16, 1921 to George and Barbara (Schneck) Martin, and was a graduate of Messmer High School in Milwaukee. He rose to the rank of Captain in the U.S. Army, serving from February 1943 to February 1946, including with the 131st General Hospital in England in 1944-45. He was the oldest living member of American Legion Post 480 in Presque Isle. Before becoming a resident of Lake Shore in 2008 and after his retirement from Kohl’s Food Stores, where he was a store manager in Milwaukee and other locations in Wisconsin, he lived for more than twenty years in Presque Isle on Armour Lake, on land he bought in the 1960s with his two brothers. He worked for the town of Presque Isle, and also tended bar — always wearing a vest and a red bow tie — at The Yacht Club there. He was a parishioner and served Mass for many years at St. Rita Church, was active in the Sno-Bunnies and the Legion, and loved to come for his daily cookie fix at Headwaters State Bank. He was preceded in death by his parents, his brothers Walter and Kenneth, his daughter Jane (Martin) Kuhs, and his wife, Elizabeth (Baron) Martin. He is survived by his son Scott (Denise) of Madison, and daughters Patricia Hordyk (Douglas) of Circle Pines, Minnesota, and Cheryl Martin of Presque Isle and Washington, DC. He also leaves seven grandsons, two granddaughters, nine great-granddaughters and four great-grandsons. Services and burial in Presque Isle will take place in the summer.

Donald Raymond Martin died peacefully at Lake Shore Assisted Living on December 31, 2019. He was born in Rib Lake, Wisconsin on May 16, 1921 to George and Barbara (Schneck) Martin, and was a graduate of Messmer High School in Milwaukee. He... View Obituary & Service Information

The family of Donald R. Martin created this Life Tributes page to make it easy to share your memories.

Send flowers to the Martin family.