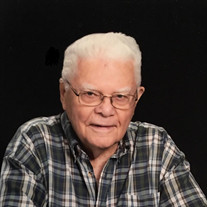 Donald “Bill” Beseler, age 95, of Woodruff, passed away on Saturday, October 27, 2018 at his home. He was born on April 22, 1923 in Marshfield, the son of William and Cora (nee Brickheimer) Beseler. Bill had been a member of the Lions, the Rotary Club, and served on the Nicolet College Board for 10 years and the Tri-County Health and Human Services Board. He was a Veteran of the United States Army, having served during World War II, and was a member of the American Legion Post 89 and the 106th Division Association for Veterans of Battle of the Bulge. Bill attended Ripon College and worked as a teacher for several years following the war. After receiving a graduate degree, he became a school administrator and served as a Principal and eventually a School Superintendent. Bill was Superintendent of Lakeland Union High School for many years. He enjoyed many outdoor activities such as hunting, fishing, boating, and gardening, and also enjoyed making things in his woodworking shop. Bill is preceded in death by his parents; wife, Marcia (nee Russell) Beseler and son, Russell Beseler. He is survived by his son, Richard (Lisa) Beseler, Coeur d’Alene, ID; daughter, Vicky (Terry) Van Straten, Merrill, WI; daughter in law, Patty Beseler, Spokane, WA; 6 grandchildren; 4 great grandchildren and sister, Yvonne (Tom) Mechler, Issaquah, WA. A Funeral Mass will be held at 11:00 AM on Friday, November 9, 2018 at Holy Family Catholic Church in Woodruff, with a gathering one hour prior to the Mass at the church. Inurnment with Military Honors will be at St. Patrick’s Cemetery. In lieu of flowers, memorials may be given to the Lakeland High School Scholarship Fund.

The family of Donald "Bill" Beseler created this Life Tributes page to make it easy to share your memories.

Donald “Bill” Beseler, age 95, of Woodruff, passed away on Saturday,...

Send flowers to the Beseler family.