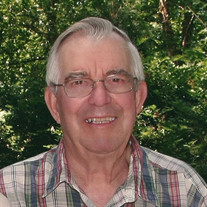 Donald Winton Benjamin, Sr., age 86 joined his wife Dorothy in eternal life on September 17, 2018. Don was born on January 23, 1932 to Winton and Frieda Benjamin in Tomah, WI. The summer before his senior year at Tomah High School, he joined a work crew on the railroads in North Dakota, and he found the hard and physical work very rewarding. Following his high school graduation in 1950, he enlisted in the Navy. He was stationed in Newport, RI and Key West, FL as a crane operator. With a strong desire to see the world, he switched duties to be stationed in Japan and Korea, working in the radar room and taking notes on the ship for the captains. He remained grateful for the parts of Asia, Europe, and the United States he got to see throughout his life. While in Hong Kong, he mailed a ring to his girlfriend in Tomah as a Christmas gift, asking to be married. He married Dorothy Chambers on January 30, 1954. In the beginning of their life together, they settled in Massachusetts where he continued his work on ships. They eventually moved to Janesville, WI, and welcomed four children. They moved to Minocqua in 1960, where Don managed a mink ranch for 12 years before buying a home on Hwy. 70 West. The family began Benjamin’s Greenery, where Don was the grower. He started all of his plants from seeds or cuttings that always yielded beautiful flowers and vegetables. They ran the business for over 30 years, and he enjoyed working with his family and cultivating relationships with their customers. Don retired in 2006. In the later part of his life, Don remained very active in his community. He loved riding his bike, putting together jigsaw puzzles, going to dinner with friends and spending time with his family. He was a coach of the Packers from his reclining chair in the living room. He delivered meals and flowers to fellow congregation members at his church, and enjoyed serving in their garden club. He appreciated knowing that his knowledge of plants could lead to strong harvests for the food shelf. Don lived his life right up to the moment he passed. He is preceded in death by his wife Dot, son, Donald Benjamin, Jr. and his daughter-in-law, Patty Benjamin. He is survived by children Melinda Benjamin (John Forrest), Stephanie Spencer (Dan), C.J. Benjamin (Joan), and three grandchildren, Matthew Forrest, Claire Forrest, and Tyler Benjamin; his sister Marlene Sebrank (Norman) and brother Gary Benjamin (Linda), as well as many nieces and nephews. A Memorial Service will be held at 3:00 PM on Saturday, September 22, 2018 at Calvary Lutheran Church in Minocqua, with visitation one hour prior to the service at the church. Picnic to follow. In lieu of flowers, memorials may be given to the Lakeland Food Pantry, P.O.Box 470, Woodruff, 54568.

Donald Winton Benjamin, Sr., age 86 joined his wife Dorothy in eternal life on September 17, 2018. Don was born on January 23, 1932 to Winton and Frieda Benjamin in Tomah, WI. The summer before his senior year at Tomah High School, he joined... View Obituary & Service Information

The family of Donald W. Benjamin, Sr. created this Life Tributes page to make it easy to share your memories.