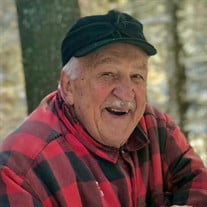 Donald W. Barnabo passed into eternal life on January 26, 2021. Donald, son of Dante and Leocadia (Cybulski) Barnabo, was born on September 16, 1933 in Ironwood, MI. Don graduated from Hurley High School in 1951. He attended Marquette University in 1952, and graduated from UW Superior in 1958. While playing college football, he was captain of his team and received All-American Honors. Don received a Masters degree in Physical Education in 1961, from Colorado State College in Greeley, CO. Don was united in marriage to the love of his life, Arloa Lillstrom on August 10, 1957 at Saint Mary’s Catholic Church in Hurley. The high school sweethearts’ love story was one for the ages. Don and Arloa raised four Barnabo children; Dana Lee, Dante James, Thomas Maurice and Lana Jeanne. Don Barnabo taught and coached for 32 years. He started his career at Oconto Falls High School in 1958. From 1959-1967, he served as teacher, coach and eventually as Athletic Director at Beloit Catholic High School. In 1967, Don Barnabo left Beloit Catholic to become a teacher and coach at the new Janesville Parker High School. Coach Barnabo’s infectious smile and uncanny ability to inspire not only athletes, but fellow teachers and staff, paved the way for Janesville’s newest high school. Barney was responsible for coining the Parker slogan, “You Gotta Wanna.” In 1967 Coach Barnabo received the Big 8 coach of the year award. He was a member of WEA-NEA and JEA, Wisconsin Retired Education Association, Wisconsin High School Coaches Association and served on the WHSCA clinic staff. He spoke at a number of coaching clinics and had articles published in the Athletic Journal, Scholastic Coach, Coaching Clinic and WIAA publications. He was a member of the WFCA Committee, which was responsible for a supporting role in developing the WIAA playoffs program. Barnabo was inducted into Wisconsin High School Football Coaches Hall of Fame in March of 1987. Former assistant coach and eventual successor Joe Dye said of Barnabo, “Good people make you better, and Barney did that to a lot of people.” The football program at Parker, and all the students’ lives he impacted, became his professional legacy In Coach’s own words, “It has been my feeling that the greatest reward of coaching is seeing the athletes succeed in their various endeavors of life. It is especially gratifying when they find time to come back and say, “Hi." I thank the Lord for allowing me to be a coach and teacher of young people.” After retiring from Parker in 1989, Don and Arloa returned to Northern Wisconsin. Don loved the Northwoods and spent the last 32 years enjoying hunting, fishing, taking daily walks, visiting with family and friends, and contributing to the community of Manitowish Waters. He was a longtime member of the Manitowish Waters Lions Club. In 1997 he was named Lion of the year. Don and Arloa’s combined personal legacy was the family they created together. They loved their family. They were proud of their children and their grandchildren. The couple’s commitment to the daily loving care of their son Dante James, for his whole lifetime, was remarkable. After Dante’s death in 2000, Don visited his son’s grave every day. After Arloa passed in 2018, he visited both their graves daily. It gives the family great comfort that Don is now with all those loved ones already in heaven. In eternal life, Don joins parents Dante John & Leocadia, brothers Jack and Bob Barnabo all of Hurley, WI, wife of 61 years Arloa (Lillstrom) Barnabo, children Dana Sweeney of Madison, WI, Tom Barnabo of Des Moines, IA, Dante James Barnabo of Manitowish Waters, WI, and an infant son. He is survived by youngest daughter Lana Barnabo-Knaack of Madison, WI, son-in-law Daniel Sweeney of Madison, WI, daughter-in-law Susan Barnabo of Des Moines, IA, grandchildren; Willow & Brian Flaherty, Tyler & Melissa Sweeney, Shane & Anna Sweeney, Dalton & Karissa Barnabo, Cole & Linda Barnabo, Sophia Knaack, Madeline Knaack, great grandchildren; Haley, Cooper, Barrett, Dane and Emma Rose, nieces and nephews, and special friends Mike and Pat Hahn. The family wishes to thank Lana for all she has done to provide the highest level of care for the patriarch of the Barnabo Family. A celebration of life is planned for a future date when we can all safely gather. In lieu of flowers, the family kindly asks for donations to be made in Coach Barnabo’s name to the Wisconsin Football Coaches Association - WFCA Attn: Charna Kelsey PO Box 8 Poynette, WI 53955

The family of Donald W. Barnabo created this Life Tributes page to make it easy to share your memories.

Send flowers to the Barnabo family.