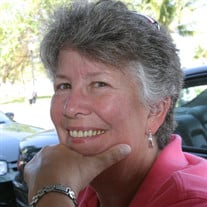 Deborah Ann Somers of Arbor Vitae, passed away at her home on November 22, 2019, two days after her 72nd birthday. Her husband of 50 years, Art, was at her side. Debbie was born in Stevens Point on November 20, 1947 to the late Donald and Jackie Walker (Miller). The family stayed in Stevens Point for a number of years, before moving to Illinois for a short time. Debbie spent her grade school and high school years in Stevens Point, where she met her future husband in high school. A musician and a singer, she performed often during high school, winning several state solo and ensemble competitions, often performing on the piano and guitar. On August 27, 1969, after Art returned from Vietnam, they were married in her parents' backyard in Stevens Point. They had their only son, Tim, on April 20, 1972. Heavily active in sports growing up, Debbie loved watching her son play sports, attending virtually every game. Often standing with Art on the orange wall at the Willett Arena during hockey games, sitting together at baseball games and standing along the fence at football games. Never the loudest, but always the most aware. Debbie was an avid supporter of the UW-Stevens Point Men's Hockey program and was a founding member of the Pointer Men's Hockey Blue Line Club. Debbie served as president of the Blue Line Club as well as the Stevens Point park board on multiple occasions. She generally worked behind the scenes to make things happen. Anything from getting the 1989 NCAA Division III national championship hockey games broadcast back to Stevens Point from New York state, to getting 90fm (UW-Stevens Point's student-run radio station) broadcasting online in the early years of online streaming. In addition to the Pointers, she followed every Badger program. On any given gameday, you would find her decked-out in one of the numerous Badger t-shirts or sweatshirts she owned and wore proudly. She was a life-long learner. She was an early adopter of computers, email and the Internet. She passed this trait to her Tim, with whom she worked frequently on projects to help the UW-Stevens Point athletic programs get online as well as many other projects. To say that she was "crafty" would be an understatement. One trip into their home, you find her handiwork everywhere. From needlepoint to knitting to crocheting to embroidery. There were fews crafts she didn't pursue and excel at. However, the one craft that she always loved was painting. Her latest works can be found throughout their house having found the passion again with the frequent painting workshops held around the Minocqua area. After a 10-year stint in Florida, Debbie and Art moved back to Wisconsin, moving "Up North" to Arbor Vitae. It was their dream to live in the northwoods and they took full advantage. The two of them quickly became involved with the people of the northwoods, primarily, through darts. They made many friends and acquaintances while shooting for different teams, often going to the state tournament. Debbie also served as a secretary, of sorts, for the league for a number of years, keeping scores and stats as well as getting them online. Debbie is survived by her husband of 50 years, Art Somers; son Timothy (Sarah) Somers of Appleton, WI; son Harry Hendrix and his son Andrew of Yuba City, CA; sister-in-Law Shari (Paul) Fisk of Lodi, WI; brother-in-Law Don (Carolyn) of Plover, WI, sister-in-law Deb of Minneapolis and several cousins, nieces and nephews. In lieu of flowers, it is requested that donations be made to the Arbor Vitae Fire and Rescue Department - arborvitaefiredept.org

Deborah Ann Somers of Arbor Vitae, passed away at her home on November 22, 2019, two days after her 72nd birthday. Her husband of 50 years, Art, was at her side. Debbie was born in Stevens Point on November 20, 1947 to the late Donald and Jackie... View Obituary & Service Information

The family of Deborah A. Somers created this Life Tributes page to make it easy to share your memories.

Deborah Ann Somers of Arbor Vitae, passed away at her home on...

Send flowers to the Somers family.