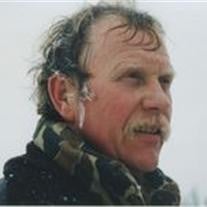 DeWayne G. “Dewey” Schwalenberg died unexpectedly on March 1, 2011, while scuba diving in Cabo San Lucas with his wife, Patty. He was a 20-year resident of Anchorage, Alaska. The funeral service and burial were held in Lac du Flambeau, Wisconsin on March 8, 2011, and a memorial service was held in Anchorage, Alaska, on March 15, 2011. Dewey was born to Mr. and Mrs. Vernon H. Schwalenberg on March 21, 1946, in Sheboygan, Wisconsin. He attended the University of Wisconsin-Stevens Point, where he graduated with B.S. degrees in Wildlife Management, Biology, and Secondary Education in Biology and Life Science. Dewey was also known as "Wally" to his buddies in his Navy career. After his enlistment in the Navy in 1965, he served aboard the U. S. S. Enterprise. He found that he wanted more from the Navy and applied for Underwater Demolition training. He completed UDT/R Class 35, East Coast, in December 1965, and was then assigned to Underwater Demolition Team 22. After a year he volunteered for SEAL Team Two and served in VietNam in 1967-68. While in SEAL Team he trained Silver, a German Shepherd, who accompanied him and his unit to VietNam. Silver was also one of the first military dogs to earn jump wings. When Wally was discharged he returned to civilian life with his best friend Silver. He later became a Lifetime Member of the UDT-SEAL Team Association. Dewey worked his entire career in fish and wildlife management, including stints with the State of Wisconsin and Smoky Lake Game Reserve in northern Wisconsin. For the last 30 years of his career, Dewey worked for Tribal Governments and Tribal Organizations in natural resource management. He started with the Lac du Flambeau Band of Lake Superior Chippewa Indians in 1981, then served the Tribes nationally with the Native American Fish & Wildlife Society in Broomfield, Colorado. In 1991, he and his family moved to Alaska, where he worked for the Alaska Inter-Tribal Council, Bering Sea Commercial Fisheries Development Fund and Foundation, and finally with the Stevens Village Council in Alaska. Dewey was a passionate advocate for the rights of Tribal Governments to manage their own resources, and firmly believed that Indigenous knowledge and education were the foundations for a successful Tribal natural resource management program. He respected Tribes and their cultures, and worked tirelessly to assist them in realizing the visions they had for their people. During his career, he developed the Lac du Flambeau Tribe’s first Tribal natural resource program, including a state-of-the-art fish hatchery and 20-unit intensive raceway facility for trout production, and a vocational technical education training program. In Colorado, Dewey opened the first office of the Native American Fish & Wildlife Society, building the organization from a strictly volunteer organization to a professional fully staffed nonprofit entity, worked with Tribes nationally to develop the Inter-Tribal Bison Cooperative, a national organization made up of Tribes who own and operate Bison farms, as well as the National Tribal Environmental Council, a national Tribal organization that focuses on environmental issues that affect Indian Country. While in Alaska, he worked with Tribes in western Alaska to become more involved in commercial fishing, assisted in the development of Tribal natural resource management programs across the state, and worked with the Stevens Village Tribal Council for 16 years on various Tribally run fish and wildlife management and research projects, including traditional moose management subsistence salmon, whitefish, and northern pike, grizzly bear and wolf. He also developed programs such as conservation law enforcement, habitat improvement, forest stewardship planning, and developed the first Tribally owned bison farm located in Delta, Alaska, boasting a land base of 2,000 acres and a herd of 118. Dewey had a long and adventurous career, and lived life to the fullest. He approached everything with energy, enthusiasm, and never gave less than 110%. He was a man of many talents and interests. As a scuba diver for 40 years, he was an instructor for 20 years, ran his own scuba diving business, conducted salvage dives, and dove all over the world, both recreationally, and dredging for gold. His contagious passion for diving spread to his entire family where every member is PADI certified and enjoyed this sport with him. He looked forward to teaching his grandson William how to scuba dive as well, so he taught him how to swim before he was three years old. Dewey was a strong athlete, competing in soccer, volleyball, football, softball, and bowling in his earlier years, and running and lifting weights three times a week until his death. He also enjoyed playing sports with his family. He was a musician, singing in the Navy Blue Jackets Choir, playing the piano, guitar, and never hesitating to pick up the tuba to play Happy Birthday for each and every member of the family on their special day. He was also a dog trainer and started a search and rescue team in northern Wisconsin. He was a numismatist, woodworker and builder, outdoorsman, hunter, avid fisherman, gardener, military historian, and loved being out in the water. Most of all, Dewey had a strong spiritual faith and was extremely devoted to his family, always ensuring their health and safety. Doing everything as a family, including work, recreation, and worship was his highest priority. In recent years, it was common to see Dewey sitting, patiently, while his grandchildren climbed all over him or fell asleep in his lap. He was a man of honor, passion, energy, and had an incredible mind with the uncanny ability to assess a situation and devise a solution almost instantaneously. His intelligence, good humor, and leadership will be sorely missed but these qualities will live on in each of those who were fortunate enough to know him. Dewey was preceded in death by his parents, and his brother Craig R. Schwalenberg. He is survived by his wife, Patty; children Sadie (Ian) Anderson, Katie Jerue, and Adam Manor-Schwalenberg; three grandchildren, William, Eva and Morgan; his brother Terry (Ruth) Schwalenberg, and two nephews, David continued... 1 2 Next ...continued (Elizabeth) Schwalenberg and Andy (Cameo) Schwalenberg, as well as numerous aunts, uncles, nieces, nephews, and cousins. Previous 1 2

DeWayne G. “Dewey” Schwalenberg died unexpectedly on March 1, 2011, while scuba diving in Cabo San Lucas with his wife, Patty. He was a 20-year resident of Anchorage, Alaska. The funeral service and burial were held in Lac du Flambeau, Wisconsin... View Obituary & Service Information

The family of DeWayne Schwalenberg created this Life Tributes page to make it easy to share your memories.

Send flowers to the Schwalenberg family.