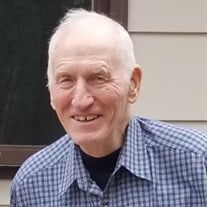 Daryl K. Lighthall, of Hazelhurst, WI, passed away peacefully after a courageous battle with cancer, at home surrounded by his family, on the morning of January 24th, 2022. Daryl was born on March 14, 1935, to Minnie and John Lighthall, and grew up in Prentice, WI, with his brother, Jack, and his sister, Jean. Daryl met his best-friend and wife, Florence Kroll when he was just 12-years-old, eventually marrying her on February 26, 1955. Daryl and Florence had three children together - Nancy Mihlbauer, Deborah (Daniel) Wolter, and Wayne Lighthall. He will be remembered as a wonderful husband and father, who greatly impacted all who knew and loved him. Like his father before him, Daryl was a skilled man who worked hard to build a life for his family. He served in the U.S. Air Force from 1954 to 1958, stationed in Wichita Falls, Texas. In 1967, he and Florence hand-built their family’s home in Hazelhurst. Over the years, Daryl worked a variety of trades, including farming, logging, road-cutting, semi-driving, and building cottages with Florence. Daryl’s last 19 years of employment were dedicated to his local Walmart, where he became fondly known as “the Walmart guy.” In his free time, Daryl enjoyed spending his time “tinkering,” creating, and repairing various mechanics in his garage. He loved his Western novels and television. He became a runner in his 70’s, eventually participating in multiple races, including marathons, half-marathons and 5ks, and receiving several medals, including 1st place for his age group in his last 5k, a four-generation race he proudly ran at age 84, with his daughter, granddaughter, and great-grandson. Daryl is survived by his wife, Florence, daughter Debbie, son Wayne, sister Jean, his granddaughter Melissa (Robert) Walkowski, great-grandchildren, Riley, Kendall, Leighton and Beckett, sister-in-law, Betty Lighthall, and many nieces and nephews. Daryl was preceded in death by his parents, Minnie and John, his daughter, Nancy, his brother, Jack, and his brother-in-law, Edward Swenson. The family would like to thank the wonderful crew at Compassus, including the nurses, aides, and volunteer Jim Carlson. Thanks also to Pastor Maxine Gray. At Daryl’s request, no funeral services will be held. Bolger Cremation & Funeral Services is assisting the family, visit www.bolgerfuneral.com to share condolences.

Daryl K. Lighthall, of Hazelhurst, WI, passed away peacefully after a courageous battle with cancer, at home surrounded by his family, on the morning of January 24th, 2022. Daryl was born on March 14, 1935, to Minnie and John Lighthall, and... View Obituary & Service Information

The family of Daryl K. Lighthall created this Life Tributes page to make it easy to share your memories.

Send flowers to the Lighthall family.