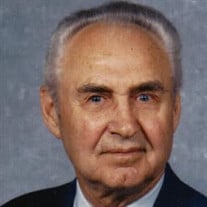 Christian Blank, 94 years old of Woodruff, passed on to meet God on December 13th, 2018 at Howard Young Medical Center in Woodruff. He had been struggling with dementia for the last three years and a sudden case of extreme pneumonia that overcame his system. He was born on June 17th, 1924 in Schotin, Germany. He was a German infantry soldier in WWII for one year to the end of the war. He worked 4 years as a prisoner of war in Italy, then in England on a farm. After release he went back to Germany and met his bride, Hedwig and married in 1951. They immigrated to the United States through Ellis Island and settled in Minocqua working at Rockwood Estates, off Hwy 70 West. He then provided caretaking for the Paul Chapman estate on Trout Lake and enjoyed meeting the Eisenhower brothers and other dignitaries. Making a job change he proceeded to care for the Dane Crook estate off Hwy 70 West. Mr. Crook was a timberman and Christian helped clear and plant many of the pine plantations around the Lakeland area, which are still standing and maturing today. He then went to work a career at the Wisconsin DNR hatchery offices in Woodruff, providing 25 years of lead maintenance to the many buildings and offices. He loved to work and meticulously maintain the grounds and structures. He retired in 1991 and continued to work many building projects on he and his children’s homes. He also worked a part time job at the Methodist Church of the Pines for many years providing maintenance. He was a long time member of the church and watched it grow over the years and made many lifetime friends there. In his younger years, he was an accomplished artist and was exceptional at drawing people in pencil and scenes in oil. He is survived by his wife of 67 years, Hedwig. They together raised three sons, Dietmar Blank (Janet) of Hermitage, TN, Daniel Blank of Arbor Vitae, WI and Dale Blank (Lori) of Hazelhurst, WI. He loved spending time with his five grandchildren, Julia, Nicholas and Braedon, Grace and Gabbie Blank. Funeral services will be at Bolger Funeral Home in Woodruff, WI on December 22nd. Visitation will be from 10:00 am to 12:00 pm, then prayer service soon followed by burial at Sunset Memorial Gardens Cemetery, off South Farming Road, Arbor Vitae. Followed by luncheon at Methodist Church of the Pines downtown Minocqua.

Christian Blank, 94 years old of Woodruff, passed on to meet God on December 13th, 2018 at Howard Young Medical Center in Woodruff. He had been struggling with dementia for the last three years and a sudden case of extreme pneumonia that overcame... View Obituary & Service Information

The family of Christian Blank created this Life Tributes page to make it easy to share your memories.

Christian Blank, 94 years old of Woodruff, passed on to meet...

Send flowers to the Blank family.