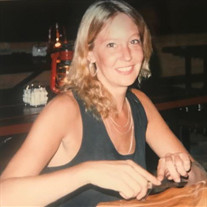 Charlotte Gwen Sucic was born August 25th, 1954 to Carolyn Gibbon and Floyd Olson in Hazel Crest, IL. She grew up in Park Forest South with her mother, second father Kenny Gibbon, and his two sons Kevin and Kenny Gibbon She attended Crete-Monee High School and graduated in 1972 and later attended Joliet Junior College where she earned an Associate’s Degree in Business. She joined the United States Army right out of high school and served 3 years as an Operating Room Technician. After her military service she returned to Illinois where she met Jeffery Sucic. They wed in 1980 and had two children during their 17 year marriage, Zachary and Jessica. They lived in multiple places around Illinois due to Jeff’s job and she found work as a mother, advertising designer, and customer service representative. After their marriage she lived many years with her parents and they all traveled between homes in Florida and in Wisconsin like snow birds. Later on in life, Charlotte enjoyed working in the bakery, watching her grandchildren grow, and playing games on the computer. She also enjoyed reading, creating beautiful flower gardens, and entertaining the wildlife Up North. She is loved by many and will be greatly missed as she left us all before her time. She passed away unexpectedly due to complications during surgery on Oct 25, 2018. She was preceded in death by her two step brothers and father, Kenny Gibbon. She is survived by her parents Carolyn Gibbon (Arbor Vitae, WI) and Floyd Olson (Kentland, IN), her son Zachary Sucic (Richmond, VA) daughter and son-in-law Jessica and Michael Lewis (Moline, IL) and their children (her 3 grandchildren) Madilyn, Mikayla, and Maddox Lewis. The funeral service will be held at Bolger Funeral Home – Woodruff Chapel on 1212 First Avenue in Woodruff, WI 54568 at 4PM on Tuesday October 30th, , visitation from 3-4PM. In lieu of flowers, please make donations to Habitat for Humanity.

The family of Charlotte G. Sucic created this Life Tributes page to make it easy to share your memories.

Send flowers to the Sucic family.