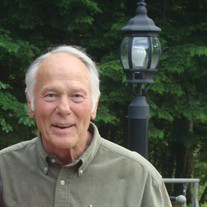 Charles Edward Yost of Lake Tomahawk, WI passed away peacefully surrounded by his loved ones on August 13, 2018. Charles was born on January 21, 1940 in Chicago, IL to Edwin G. Yost and Irene M. Yost (Seivert). He was preceded in death by both of his parents, his son Douglas P. Yost (Rice Lake, WI) and his first wife Susan Pelton (Providence, RI). He leaves behind his loving wife of 25 years Avelin S. Yost and their son Edwin D. Yost of Ontonagon, MI; daughter Angela S. Yost, three grandchildren: Alexander Munson, Tyler Munson (Hannah Courter), and Destiny Kolve of Chippewa Falls, WI; sisters Ann Henne (Dave) of Sun Prairie, WI and Meagan Yost of Hollandale, WI; brother Edwin “Butch” Yost (Rose Marie) of Tavernier, FL; and numerous nieces and nephews. Charles grew up on the family resort Bide-A-Wee on Lake Hasbrook, WI where he developed his passion for the great outdoors. He was in the first graduating class of Lakeland Union High School. He was an 82nd airborne US Army veteran, graduated from UW-Stout, Menomonie, WI and earned his doctorate in Manufacturing Engineering from U of M, Minneapolis, MN. Charles did exhibition parachuting and training during his college years and was a recipient of the Bush Fellowship scholarship. He started his teaching career at UW-Stout. During a sabbatical, he was a bush pilot and flight instructor in Alaska. After returning to his career at UW-Stout, he built a single engine floatplane which he operated along with other aircraft. Charles was an avid outdoorsman. He enjoyed his time and camaraderie with his fellow hunting and fishing pals. He took great pride in being the camp cook and meat processor. He loved taking care of people and inspired others. He was a patriot and a staunch supporter of the US Constitution. After retirement, he and his wife, Avelin, and their newborn son, Eddy, relocated to Ontonagon, MI where Charles continued his passion for flying, hunting and fishing. Throughout his life, he contributed by serving on many committees, boards, and commissions. In lieu of flowers contributions can be made to: Ontonagon Volunteer Fire Department PO Box 126 Ontonagon, MI 49953 We are so grateful for the prompt response and support to assist Chuck and his family.

Charles Edward Yost of Lake Tomahawk, WI passed away peacefully surrounded by his loved ones on August 13, 2018. Charles was born on January 21, 1940 in Chicago, IL to Edwin G. Yost and Irene M. Yost (Seivert). He was preceded in death by both... View Obituary & Service Information

The family of Charles E. Yost created this Life Tributes page to make it easy to share your memories.

Send flowers to the Yost family.