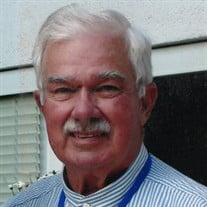 Charles C. "Chuz" Wilson, age 89, of Winchester, Wisconsin passed away on December 29th, 2020 at Marshfield Medical Center. Born May 17th, 1931 in Rock Island, Illinois, the Son of Louise and Lewis Wilson, he attended Lawrence College in Appleton and graduated in 1958 from Augustana College. He was a Marine Aviator in Korea from 1952-1956. He was Chairman of The First National Bank of the Quad Cities and Past President of Rock Island Chamber of Commerce and The Outing Club. He was a member of the board of directors and Chairman of The Association of Modern Banking in Illinois (AMBI), which merged with The Illinois Bankers Association (IBA) where he served as President. For sixteen years he served on the Board of Directors of Augustana College. He had a great interest in sports - tennis, golf, skiing, sailing, biking, and football. Preceded in death by his Parents, brother Lou Jr., sister Marilyn Chappell and brother in law William Butterworth. Chuz is survived by his wife Kathleen "Kath," children Katy Wilson (Rock Island, IL), Charlie Wilson (Winchester, WI) and Clinton Wilson (Elizabeth) Naples, Florida; five Grandchildren, five Great Grandchildren, Sister Elinor Klingbiel (Tom) (Moline, IL) and sisters-in-law Sandy Butterworth and Geri Wilson. Memorials may be made to Wild Instincts (Newbold, Wisconsin), The North Lakeland Discovery Center (Manitowish, WI), Quad City Symphony or Augustana College.

The family of Charles C. Wilson created this Life Tributes page to make it easy to share your memories.

Send flowers to the Wilson family.