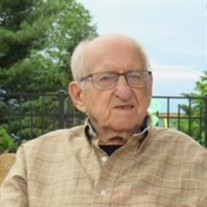 Carl Jack Mucha, age 96, formerly of Lake Tomahawk, died on November 11, 2020 at Copperleaf Assisted Living in Marathon City. He was born on November 13, 1923 in Chicago, IL. Carl married Janet Ligman on April 30, 1960 in Rhinelander; they spent the majority of their life living in Lake Tomahawk raising their three children, Carla, Brenda and Glen. Carl began his career with the Wisconsin Department of Natural Resources in 1950; retiring in 1978. Carl was proud to be a Veteran of the United States Navy, serving in WWII. He was a 75 year member of the American Legion, holding the position of Commander for Post 318 Lake Tomahawk, County Commander and being on the color guard. Carl was awarded Legionnaire of the Year in 1991 and had the opportunity to fly on the Never Forgotten Honor Flight in October 2012 with his son, Glen. He was one of the original members of the Lake Tomahawk Snowshoe baseball team and was a volunteer fire fighter with Lake Tomahawk Fire Department; receiving Firefighter of the Year in 1991. He enjoyed time gardening and being outdoors but most of all he loved spending time with his family. Carl is preceded in death by his wife, Janet Mucha on August 9, 2012. He is survived by his children, Carla (Allen) Beck of Weston, Brenda (Bob) Kempf of Rice Lake and Glen (Sarah) Mucha of Edgar; grandchildren, Kristen (Chad) Waechter, Kaitlyn Beck, Morgan (Matthew) Gannon, Alex (McKenna) Kempf and Jessica, Kendra and Laura Mucha; great grandchildren, Elsie and Adeline and special niece, Gail McGinnis of Camp Douglas, WI. The family would like to extend a special thank you to the staff at Copperleaf Assisted Living staff in Marathon, where Carl resided for the last 8 years. A private family Mass of Christian Burial will be held on Friday, November 20, 2020 at Holy Family Catholic Church in Woodruff, followed by interment with Military Honors at Wilderness Rest Cemetery in Lake Tomahawk. In lieu of flowers, memorials can be made to American Legion Post 318 - Lake Tomahawk or Lake Tomahawk Volunteer Fire Department.

The family of Carl Jack Mucha created this Life Tributes page to make it easy to share your memories.

Send flowers to the Mucha family.