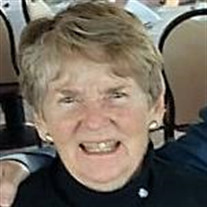 Bernadette “Bernie” Loretta Bolger, 78, of Novato, CA, entered eternal peace on Saturday, January 26, 2019, after a brief illness. She is now reunited in Heaven with her loving parents, Patrick and Mary (nee McConville) Bolger, her four cherished brothers, Patrick, Michael, Victor and Andrew, and her nephew, Patrick J. She will be deeply missed by her sisters-in-law, Jan, Ginny and Linda Bolger. Bernie was a proud and special Aunt to her nieces and nephews: Tim (Lori) Bolger, Teri (Dan) Roux, Mike (Sandy) Bolger, Kathi (Chris) Gilman, Tom (Amanda) Bolger, John (Kerry) Bolger and Jennifer (Enrique) Bolger Breceda. She was also adored by her fourteen grand nieces and nephews. She will also be lovingly remembered and deeply missed by her large, extended Irish family and her travel companion and faithful friend, Sue Rowley, as well as her many other life-long friends. Bernadette was born on January 11, 1941, in Minocqua, Wisconsin. As the only girl in her immediate family, she learned early on to be a champion for women. She excelled in school and was the valedictorian of the first graduating class from Lakeland Community High School in 1958. In 1962, she graduated magna cum laude from Marquette University with a Bachelor of Arts in Education. Feeling called to a larger purpose, she entered the convent and joined the Order of the Sisters of Saint Francis of Assisi and was named Sister Harriet, after her special Aunt. Upon leaving the Order in 1967, she received her Master of Arts Degree in Education from Marquette University in 1969. Approachable and supportive, she served as the Dean of Women at Quincy College in Illinois and the Dean of Students at the University of San Francisco. She then went to Boalt Hall Law School at University of California, Berkeley, graduating in 1976. She was admitted to Gamma Pi Epsilon (now Alpha Sigma Nu), the National Jesuit Honor Society for Women. She truly embodied and believed in the core tenants of the society: Service, Loyalty and Scholarship. She had a long and successful legal career serving as Senior Counsel at Bank of America, Managing Counsel for Bank of California, and Chief Counsel of Mellon Capital Management. She was a mentor to many young people with whom she worked. Active in her community, she was on the Board of Directors of the Catholic Charities of Marin County, an active volunteer at St. Vincent De Paul Society, and served on the Citizen’s Oversight Committee for the Novato Unified School District. She served on the 2006-2007 Civil Grand Jury in Marin County before joining the Marin County Employees’ Retirement Association Board as an appointed trustee in 2008, serving four times as Board Chair. Her keen legal mind and tenacity for transparent and good financial processes helped many organizations function with stability and strength. An advocate for social justice, she lived a simple life and supported environmental protection. A devout Catholic and an avid golfer, she loved her life in California, her special dog and best friend, Mackenzie “Mac,” travel, bridge, quiet retreats, family gatherings and her large group of dear friends. She was proud of her Irish heritage and loved being one of twenty-one first cousins, who were more like brothers and sisters. Anyone who knew her loved her kind, generous, loving nature and her great sense of humor. A memorial reception will be held in Marin County in the near future for her California friends and colleagues. A mass celebrating Bernadette’s beautiful life and devotion to her family and faith will be held in Minocqua Wisconsin at a later date this summer, along with a joint visitation with her dear “Irish twin” brother, T. Michael Bolger, who preceded her in death less than two months earlier. Condolences may be sent to: The Bolger Family, c/o Bolger Funeral Home, P.O. Box 87, Minocqua, WI 54548, www.bolgerfuneral.com. The family requests that in lieu of flowers, memorials in Bernie’s name be made to: Homeward Bound of Marin, 1385 N. Hamilton Parkway, Novato, CA 94949; the Minocqua Museum, 503 Flambeau Street, Minocqua, WI 54548; Marquette University, Women’s Council Scholarship, Zilber Hall, Suite 421, 1250 W. Wisconsin Ave., Milwaukee, WI 53202.

The family of Bernadette L. Bolger created this Life Tributes page to make it easy to share your memories.

Send flowers to the Bolger family.