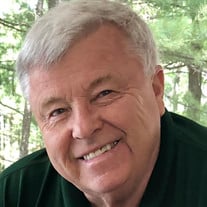 Barry David Jolin, age 66, of Minocqua, passed away on Friday December 27, 2019 at Aspirus Wausau Hospital after suffering a stroke four days earlier. His loving daughters and sons-in-law were at his side. Barry was born March 14, 1953 in Tomahawk, Wisconsin to Wallace and Lorraine Jolin. He grew up in Boulder Junction, Wisconsin, a town he loved and worked hard in for many years. From an early age, he worked for his dad at Jolin’s Standard Station right across the street from his home. He graduated from Lakeland Union High School in 1971. He later went on to buy the local marina which became Jolin’s Marine Center for over 30 years. Barry’s second career came after the sale of the Marine, and he enjoyed working as Realtor at Coldwell Banker in Minocqua over the last 15 years. He truly enjoyed selling boats and real estate and considered so many of his customers and clients as lifelong friends. He started a family in the late 1970s and helped raise his two daughters in the Northwoods. He loved traveling with them and spending time on the water together. Barry also enjoyed golf, cards, and sports, especially his beloved Green Bay Packers. He spent many, many years coaching the Pack from either his seat at Lambeau or his recliner! In recent years he became a grandfather and enjoyed every second he could with his two grandchildren—everywhere from at home to school events to Lambeau Field to Disney World. Above all, Grandpa told the BEST stories. His stories, big heart and smile will never be forgotten. Barry is survived by his daughters Courtney (Nick Durkee) Jolin and Stephanie (Billy Ross) Jolin, brother Rick (Kathy) Jolin, nephew Brad (Karla) Jolin, “third” daughter Megan Colianni, grandchildren North and Fischer Durkee, as well as many dear friends and extended family members. He was preceded in death by his parents Wallace and Lorraine Jolin, and infant daughter Brooke Jolin. Visitation will be held at noon on Friday January 31, 2020 at Ascension Lutheran Church in Minocqua. A memorial service will immediately follow at 2 PM. In lieu of flowers, memorials may be made to Donate Life Wisconsin or AVW Elementary School. The family extends a special thank you to Dr. Craig Kelman and the nursing staff of the Asprius Medical-Surgical ICU as well as the Palliative Care Unit. We are deeply and forever grateful for your compassion, professionalism, and kindness. Please consider joining the Organ Donor Registry in Barry’s memory.

Barry David Jolin, age 66, of Minocqua, passed away on Friday December 27, 2019 at Aspirus Wausau Hospital after suffering a stroke four days earlier. His loving daughters and sons-in-law were at his side. Barry was born March 14, 1953 in Tomahawk,... View Obituary & Service Information

The family of Barry D. Jolin created this Life Tributes page to make it easy to share your memories.

Barry David Jolin, age 66, of Minocqua, passed away on Friday...