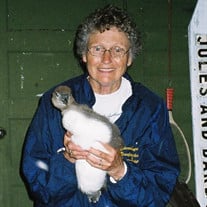 Barbara Jean Novak, 90, of Presque Isle, passed away on August 7th in Rhinelander, Wisconsin. A graveside service for family and close friends will be held at 10 AM on Wednesday, August 12th at Presque Isle cemetery. Arrangements are by Bolger Funeral Home. A celebration of life will be held in the future when travel and gatherings are safe. Barb was born in Pontiac, Michigan to Alice and Harold Rioux on June 7th, 1930. She spent her childhood near Clarkston, Michigan. Barb pursued education all of her life, graduating with a Bachelor of the Arts degree from Taylor University in Indiana and a Master’s degree from the University of Colorado. She taught middle and elementary school in Illinois, Florida, and Wisconsin. She met her husband, Jules - a fishing guide, when she vacationed in Presque Isle. They were married on April 19th, 1962 in Florida. They were both avid hunters, fishermen, and loved the North Woods. Barb developed many lifelong friendships in and around the water which was one of her first loves. She was a Mariner Girl Scout as a youth, was an avid water-skier, slaloming Van Vliet lake into her 70’s, and sharing her boating enthusiasm as a Boating Safety instructor for over 25 years. For nearly 50 years she lived surrounded by water, on the Van Vliet lake Island, where she first fell in love with Jules. In her later years, she wrote about some of her island adventures in a local newspaper column, “The View from the Middle of the Lake.” Barb loved dogs and was often seen with her English Pointer companions around the lake and in town. She traveled to Alaska and became a fan of the Iditarod sled dog race. Barb had a passion for U.S. history and was an active member of the Daughters of the American Revolution and was honored in 2016 by the Stevens Point chapter for over 35 years of service. Barbara is preceded in death by her husband Jules, her brother Robert, and granddaughter Shannon. She is survived by her sons Jay and Jon Novak, sister Lorraine Dahl of Danville California, grandchildren Josh, Suvi, Eli, Alexis, and Brent Novak, Valerie Orlowski, Jodi Demolas, and great-grandson Michael Orlowski. Memorials may be given to the Discovery Center (discoverycenter.net). Barb’s family wishes to extend sincere thanks to her Northwoods neighbors and the Frandy family for frequent visits, the Church of Manitowish Waters for ongoing spiritual support, and the Ministry Hospice.

Barbara Jean Novak, 90, of Presque Isle, passed away on August 7th in Rhinelander, Wisconsin. A graveside service for family and close friends will be held at 10 AM on Wednesday, August 12th at Presque Isle cemetery. Arrangements are by Bolger... View Obituary & Service Information

The family of Barbara J. Novak created this Life Tributes page to make it easy to share your memories.

Barbara Jean Novak, 90, of Presque Isle, passed away on August...

Send flowers to the Novak family.