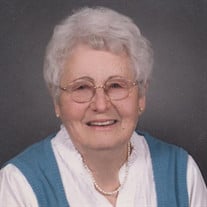 Arlette Ann Zeinert Arlette Ann Zeinert, age 91, of Arbor Vitae, passed away April 11, 2020 at Avanti Health and Rehabilitation of Minocqua. She was born Sept. 27, 1928 in Milwaukee, to the late Edward and Hilda Tucker. Upon graduating from Washington High School in Milwaukee in 1946, she moved to Minocqua with her parents, where they owned and operated a resort on Lake Shishebogama. She then went to work at the Nestledown Ice Cream and Gift Shop in Woodruff, where she met her loving husband, LeRoy, of 57 years. They were married Oct. 4, 1947 at St. Patrick's Catholic Church in Minocqua. Arlette worked at Simpson Electric for 10 years and then in the kitchen at Lakeland High School for 23 years. Upon retiring in 1993, she was a volunteer at Howard Young Medical Center, involved in knitting prayer shawls for the sick, and continued to bake her famous chocolate chip cookies and German potato salad for all family events. Arlette was preceded in death by her husband, LeRoy; son, James; sister, Barbara, and her parents. She is survived by two children — Diane (Bill) Saal and LeRoy, Jr., both of Arbor Vitae and daughter-in-law Cynthia of Williamston, North Carolina; her six grandchildren, Tracy (Greg) Schmitz of Sherwood, Cory (Kelly) Saal of Portland, Ore., Edward (Sarah) Zeinert of Wausau, Justin Zeinert of Jacksonville, Fla., United States Navy, Jessica (Ed) Reevie of Bunn Level, N.C., and Tim (Kobi) Nixon of Woodlawn, Tenn. She is further survived by 15 great-grandchildren and three great-great-grandchildren. Arlette is also survived by brother Ken (Lucille) Tucker; sisters-in-law, Dorothy, Phyllis, Bonnie, Peggy and Sandy and special friends Diane Rust and Jessee Moncatch. A Funeral Mass will be held at a later date at Holy Family Catholic Church in Woodruff.

Arlette Ann Zeinert Arlette Ann Zeinert, age 91, of Arbor Vitae, passed away April 11, 2020 at Avanti Health and Rehabilitation of Minocqua. She was born Sept. 27, 1928 in Milwaukee, to the late Edward and Hilda Tucker. Upon graduating from... View Obituary & Service Information

The family of Arlette A. Zeinert created this Life Tributes page to make it easy to share your memories.

Send flowers to the Zeinert family.