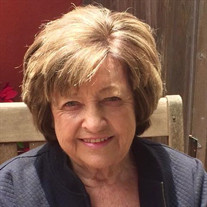 Arlene Evelyn Petrauskas October 20, 1926 – October 15, 2021 Arlene Evelyn Petrauskas, 94, died Friday, October 15, 2021 in Santa Barbara, California with her family by her side. Funeral services will be held Saturday, October 23, 2021 at 1:00 p.m. at the Bolger Funeral Home in Minocqua, Wisconsin with Arlene’s nephew, Pastor Rod Spillane officiating. Burial will follow in St. Patrick’s Cemetery in Woodruff. Arlene was born on October 20, 1926 to Gregor and Eldrid (Glimsdal) Lokre on the family farm near Madelia, Minnesota. She attended country school and Madelia High School. Upon graduation she moved to St. Paul, Minnesota and worked as a stenographer for Northern Pacific Railroad. On June 30, 1956, Arlene was united in marriage to Richard Petrauskas at Faith Lutheran Church in Madelia. They moved to California and worked together in their own businesses, Pacific Coast Sales Inc., and later Minocqua Shores (FKA Island City Point Resort) in Minocqua. She continued to operate the Resort another ten years after Richard’s passing in 1988. For most of her life she divided her time in California with summers spent in Minocqua. Arlene enjoyed gardening and was very artistic. She founded her own ceramic jewelry business early in her career. Immensely proud of her Norwegian heritage, her love of travel was only surpassed by spending time with her grandchildren and family. Survivors include daughters, Cynthia Lokre and her husband Roland of Santa Barbara, CA, Kathryn Haensler of New York, NY; three grandchildren, Austin, Brendan and Lauren Lokre of Santa Barbara, CA; sister-in-laws. Bonnie Lokre of Madelia, MN and Doris Lokre of Kronenwetter, WI and many nieces, nephews as well as cousins in Norway. Arlene was preceded in death by her parents; her brothers, Paul and Olav in infancy on Ellis Island upon arrival to the U.S. from Norway, Paul, (Adeline) Arnold, Erling, Palmer, Gerhard Lokre, and sisters, Margaret (Bruce) McDonald and Ruth (Norval) Sandstrom. Memorials may be made to St. Jude Children's Research Hospital.

The family of Arlene E. Petrauskas created this Life Tributes page to make it easy to share your memories.

Send flowers to the Petrauskas family.