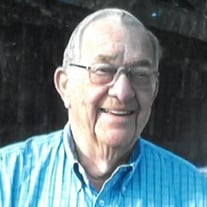 Albert Lewis (Lewie) Behn, 88 years old, was born December 29, 1931 to John and Erna Behn in Campbellsport, WI, entered into eternal rest on April 11, 2020 after a long illness. A 1949 graduate of Arbor Vitae High School, he married the late Maryanna Ahlborn on October 27, 1952. Lewie served in the Army in the Korean War and was awarded a Bronze Star. As a member of the American Legion Post 89 in Minocqua for over 60 years, he served as commander in 1984 and 1985, and was instrumental in the construction of the current post building in 1981. For his years of service, in 2013 he participated in the Wisconsin Honor Flight to Washington D.C. with his son, David. Lewie moved with his family to Twinsburg, Ohio in 1963 to work at the Chrysler Stamping Plant. He retired from his supervisor position in 1975 and returned to northern Wisconsin to open Lewie’s Bait Shop in Minocqua. Lewie had a passion for home building and he built the family homestead on Patricia Lake and two other houses in the Minocqua area. In 2000, Lewie moved to Cambridge in Southern Wisconsin with his sweetheart, Yvonne Fosdick. Together they were active members of Grace Lutheran Church and enjoyed family gatherings with Yvonne’s children Dan, Jeff, Pam and Gloria. For many years they “snowbirded” in Florida to escape winter and in 2014 they enjoyed the trip of a lifetime to Australia and New Zealand. Summer highlights included reminiscing at the Behn-Raichle reunions and visiting with family and friends from all across Wisconsin. He enjoyed tending his gardens, filling his bird feeders, golfing, fishing, hunting and playing a rousing game of Euchre. Lewie also cherished the wild game and fish feast gatherings with his buddies Dan, Bill, and Dale. Lewie is survived by his sons David (Mary Ohlsson) Behn and Douglas of Minocqua, and daughter Denise (Michael) Cuper of Aurora, Ohio; 11 grandchildren, 14 great grandchildren, 2 great great grandchildren; sisters, Alyce Bailey and Donna Bassett. He was preceded in death by his son Duane, daughter Doreen, granddaughter Cindy Behn, brothers Robert, Clarence, Gene and John Behn, Roger and Fred Raichle , sisters Florence Brooker and Helen Maines. Friends and Relatives are invited to Minocqua Memorial Cemetery on Blue Lake Road for a Graveside Service at 1:00 PM on Saturday, August 1, 2020 followed by full Military Honors.

The family of Albert "Lewie" Behn created this Life Tributes page to make it easy to share your memories.

Send flowers to the Behn family.